by Target For Tomorrow 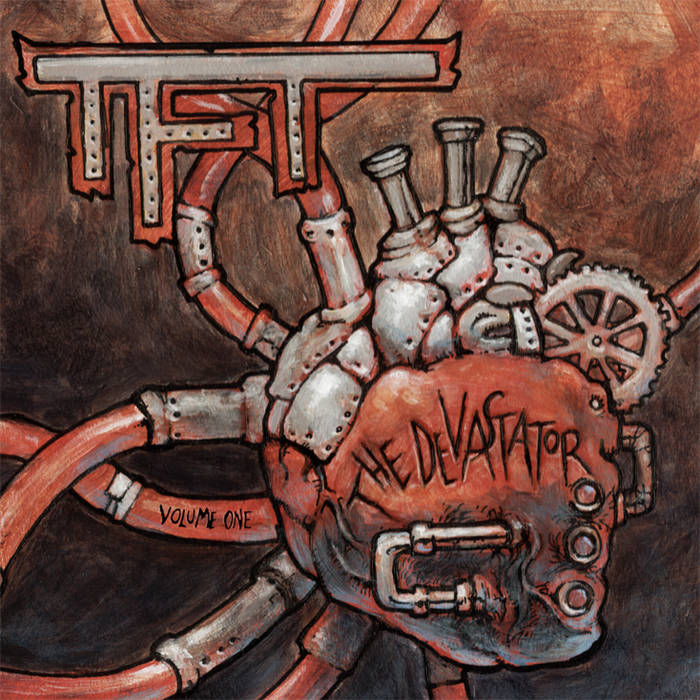 Track Name: Code Names
A businessman of sorts
What welcoming new scenery
Eyes closed, I’d count to three
But still remained his shape
Mother dear, do you know what you’ve brought home?
‘Cause it doesn’t take a prodigy, or an oddity
To split the jaws and reveal the teeth
Yeah, I knew, I knew
And how I wish she would’ve seen
If she could learn to hold her head up high

Whispers of persons I never, ever knew
Just old games and code names are all he’s selling you
What targets remain, what tomorrow lies ahead
When the children shut their eyes,
When they’ve all been put to bed?

From an honest man, of course
What this world has done to you
Hard to believe it’s true
But you can tell your friends
Your bitter boys deserve the right,
It wasn’t them, started the fight
We’re gonna take good care of you
But never mind what you do
Just lock and load
A trigger pull will cover up what’s inside

Whispers of persons I never, ever knew
Just old games and code names are all I’m selling you
What targets remain, what tomorrow lies ahead
When our family shuts its eyes,
When we’ve all been put to bed?

Whispers of persons I never, ever knew
Just old games and code names are all he’s selling you
What targets remain, what tomorrow lies ahead
When the world shuts its eyes,
When our future’s left for…
Track Name: Going Down
The fools have all come out to play
Testosterone is on display
Ask what it means to be a man, when fathers run and mothers stay
To fight the good fights, your hollow words so easily defeat
Can you hear them crying in the street?
Your songs are all stuck on repeat…
What responsibility in rhyme
But to inspire children to crime
Who need their mothers, need their fathers so

You say respect is an entitlement
Well, that’s really not my style
Nor are handguns mixed with alcohol
I can do this for a while
And if you really think about it, does your bravado compensate
For your failed self-education, you say it’s me who’s second rate
‘Cause when we crack our books and read about crooks
We know just what you are
But then TV’s shapes point out our mistakes, you’re most certainly a star

Tell us all the reasons why you double-crossed our trust

Not fools, they all came out today
They’re gonna find a better way, because
Despite your methods, the truth can reach their ears
And I know you’re so afraid, when reason wins, you’re never paid
But we’ve finished shedding tears,
To replace the fears with better years
Track Name: Sacred
The light slides sideways
Should I believe in what I see this time?
What two eyes define?
You’re putting pictures up on the wall,
They say it all, and it sounds so good
You’re singing along, such a beautiful song
I forget what is wrong, just give me that sweet, sweet melody again, come on

So tell me what you mean
When you say you don’t know anything
And is this just a dream
Because it feels so real
Yeah, It feels so real to me

When night dies so young
Should I begin to question what is right?
How am I to fight?
When you’re dropping notes at the end of the hall
They’re singing it all, and it never sounded so good
You’re playing along, such delectable song,
How could this be wrong,
When all you ask of me is but to taste a little harmony, oh?

They’ll wonder how I ever got by alone
My solitude was sacred,
And I could trust everything,
If you’d but only look at me

So tell me what you mean
When you say you don’t know anything
And is this just a dream
Because it feels so real to me
They’ll wonder how I ever got by alone
My solitude was sacred,
And I could trust everything,
If you’d but only look at me
Track Name: Won't You
When you thought you learned your lesson,
I was standing right beside
When you thought you found the answers,
There was still so much to find
When the stars all leave the sky,
You know they’re leaving us to die, oh
Don’t you ever, oh you never
Don’t you ever want to ask them why?

When I tried to find the reason that my reason could not find
I was praying for a glimpse at all the secrets of your mind
With the day becoming night, our sun will leave us all behind
Afraid it’s never coming back, I’m here to gather what is mine

When you thought that I was listening to what you said before
I was making up new meanings, your words became so much more
Now I sure as hell am slipping, feet refuse to hold me up
And from the look you’re wearing now, I can see you’ve had enough

Now I spend my days taking life lessons from people I will never meet
Much like asking for directions walking down a foreign street
My own trust I have betrayed, I only wish I had never stayed
I can hear a difference in your voice, and I can tell you are so afraid

You know I’d just love to take you with me when I go
And how I’d love just to think no one would ever know
But why can’t I let you be all that you want to be?
And why can’t I set us free from my insanity?
Track Name: Caricaturea (I)
You bore my afflictions, grave addictions
So I’d make a name for myself
Would it rise occasions or persuasions?

As developed authors gleaned few honors
From the revered of elite,
From the bitter stillness came a new mistress…

When we dared to dream into the brimming world that founded fame
We found a path to where people come to forget their own names
What calculating businessmen we are, to sustain such an industry
But honey, if we forget how to live happily, hush, pretend that it doesn’t matter

Don’t tell your brothers, nor another
Your character, it’s just a game
Successful sister, not a whisper

The road, it weaves us sweet soliloquies
(omit our commitments again)
Yeah, but shadowed secrets soon no longer…

When we dared to dream into the brimming world that founded fame
We found a path to where people come to forget their own names
What calculating businessmen we are, to sustain such an industry
But honey, if we forget how to live happily, hush, pretend that it doesn’t matter

Honey, if we forget how to live happily,
Hush, pretend that it doesn’t matter

‘Cause I hid so long from the light
No, this isn’t right
I Fear I’ll answer for this tonight
On my knees, I swear to repair
To negate all despair
But right now, dear, I need you to come with me

Honey, if we forget how to live happily,
Hush, pretend that it doesn’t matter

Time and time again I mislead
A heart which now I’d die to heal again
How long can love unspoken weather
This storm of silence in my bed?

Hands are tied, the puzzle’s picked apart
I watch the picture ‘fore my eyes dissolve
I wonder now what happens at the end
Will grace offer its hand to us all?

As birds without wings dream of sky
Tonight finds none regretful as I
The better man I’ll be should I…
Track Name: Penance (III)
A beast awoken from within me
Tearing through the binds, it’s showing
Just how buried my poor soul had been
Brilliantly the light shines in
It’s filling me with warmth, and with
A voice more precious, now I beg
Another chance and for absolution

Mind and body through with sin,
But the solemn fact is this, I’ve been
Responsible for many wicked deeds
Clear to me now the path ahead
A journey back into the dread
To face the problems of my past,
And stamp out all the guilt in my chest

I’m learning now the self I want to meet
Here I stand, broken loose and free of all my chains,
I’m casting off, unafraid to face the waters before me
I’m patching all the holes and setting sail

Listen close, I’ve lead you wrong,
I know the past can’t be undone,
But believe me now, this place you’re in
It swallows whole the heart and soul
I know that you’ve got what it takes
So run with it and run away
And with these words come my final farewell
And to all of you who’ve seen this through
Time and time again you ruin
Honesty and aspiration
Thoughtfulness, imagination
Manipulating lives you play your
Money games and hide the truth
The fame you give makes monsters
Never again will I be one of you

As for myself, it’s time to face
All the demons that I put away
Let me prove that I’m a different man
Ashamed of all the lies I said
And choices that I made instead
I’m sorry honey, please forgive
A man whose only longing’s to live

Learning now the self I want to meet,
Here I stand, broken loose and free of all my chains,
I’m casting off, unafraid to face the waters before me
I’m patching all the holes and setting sail

Friends and the like, this is my penance
Starting anew, I am cleansed of their sins
My hands and my heart I offer to you for
Creation of what it is we live for
Track Name: Collections
Step up to the camera and give us a smile
You are welcome to stay, well, at least for a while
Just button up, dress down, you’re one of the elite
But by winter, your anthem rings so bittersweet

To make you so sickeningly famous
Bore fine print you prayed you could ignore
From debts you never dreamt of owing
There was nowhere to run, collections was knocking at your door

Seems what I’ve spoken to writers whose words did adore, was just
Ink unto what pages have signed me up for

I’m passing the lake, strange shapes laugh
Their crooked jeers scratch the sour roof of the mouth in my ears
It’s starved, and uprooted like the grass in the yard
Dog neighbor screams as if to say I’m better off that way

Petulant son, we always loved you
But we don’t know you anymore

To make me so sickeningly famous
Bore fine print I prayed I could ignore
From debts I never dreamt of owing
There was nowhere to run, collections was knocking at the door

Head for the hills, holes I’ve dug, they’re so riddled with pain, and when
I try to bury what clouds already witnessed, I just sit in the rain
And oh, don’t you love how it pours, the way it washes over everything
Their design was to put me away down below with my beautiful surrender

Like a fog from a mirror, they’ve gone
I admit each and every single wrong
Please forgive everything I have done
Every bitter note and sour song I’ve sung

Well, I never, again, ever
Will commit such abuse on another
I’ll be damned if I let myself tear us apart
Let’s reach up, and reach out to each other

I can’t belong to a system of lies
Here to steal us away, well I dare them to try
As we make our escape, I can still hear their cries

While our need to exploit leads us oft to deceive
We remain unrepentant as long as we believe
That when melodies ring, it is we who are singing
The sound that can clean any conscience